Skip to content Skip to main navigation Skip to footer

History of the merger of the three communes of Burmerange, Schengen and Wellenstein into the new commune of Schengen.

The merger of the three communes of Burmerange, Schengen and Wellenstein is based firstly on a national political willingness to create larger communes and thus also more efficient in terms of their missions assigned by law, as well as the increasing expectations of the citizens, and also due to the willingness and the need for a more intense collaboration of the three communes in certain areas, in particular for the execution and management of large-scale projects.
Below please find a chronological overview of the important milestones of the merger.

“The Government will take the necessary steps to provide the country with a public service and regional administrative organisation that meet the challenges of the 21st century:
– Establishment of a task force to develop the concept;
– Definition of the critical mass to guarantee competent and efficient administrative, technical and social services in a community;
– Encouragement of mergers of communes and supervision by the Government…”

Entry into force of the law of 24 May 2011 on the merger of the communes of Burmerange, Schengen and Wellenstein – The merger takes effect.
(according to article 12 of the above-mentioned law)

THE COMMUNES FOLLOWING THE 2011 MERGER 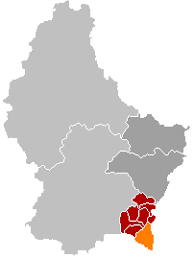 Law of 24 May 2011 Publ. Memorial A
2010 Referendum Results
The communes after the merger (diagram)